Los Angeles – the City of Angels 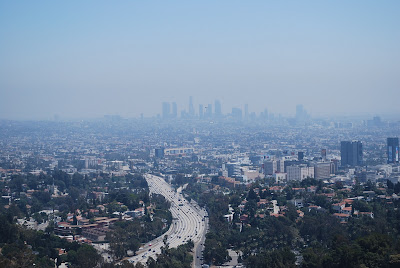 As you probably know I was on Los Angeles with three amazing people this summer. I’ve written about a few things that we did, Universal Studios, Celebrity Tour and Disney Land, so I thought it was about time to write about the actual city. Because I have never been in a city like Los Angeles.
Kjell Steinar, Johanne, Joachim and I were in America for three weeks where we were driving around, and LA was our first stop, and also where we all met after Johanne and I had spent four weeks in Asia and Oceania. You can only imagine how happy we were to finally see each other again, and the hours slowly went by as Johanne and I were waiting at our hotel for the guys.
We stayed at the Historic Mayfair Hotel, which is downtown LA, 1256 West 7th Street. I have to admit that when we first got there we thought that it was quite a dodgy area, but it later turned out that we lived just a few blocks away from the prestigious Financial District, Walt Disney Concert Hall and Union Station. On our first day we just walked in the wrong direction, so it is important to get to know the area you are living in.
Public transportation is not very good in LA, especially not the buses. But I was actually surprised when it came to the underground. It took us to the places that we wanted, such as Universal Studios and the Walk of Fame. And I have to say, the Walk of Fame was amazing, I really loved it. We were just walking around, we didn’t know where to look for the most famous names, but they are all pretty much around the Chinese Theatre. On the forecourt of the theatre you will find one of the most distinctive features in this area, which is the concrete blocks which bear the signatures, footprints and handprints of popular motion picture personalities. The Harry Potter stars, Will Smith, Fred Astaire and Johnny Depp are just to mention a few.

Michal Jackson’s star was a very popular one, and it was hard to get a good photo of it. As I was one of the many people standing there, I can totally understand why people would want a photo of this famous star. And I have to say that I was so happy when we walked past the star of Johnny Depp, who has been one of my favourite actors for years. But my absolute favourite star is the one that Kjell Steinar and I got. Yes, we actually got our very own star at Hollywood Boulevard on the Walk of Fame.
The Chinese Theatre is located at Hollywood Boulevard, and this is also where Kjell Steinar and I started our Celebrity Tour. And next to the theatre you’ll find Madame Tussauds, and Kjell Steinar and I were so lucky as to get free tickets to this attraction because we went on the celebrity tour. I actually thought it was pretty good, because there were several floors where the mannequins were spread our so you could actually take pictures with them. Also on Hollywood Boulevard you will find the famous Hard Rock Café and Hooters. There are also many shopping possibilities in this area.
One of our days in this amazing city, Kjell Steinar and I thought we’d walk to the Beverly Centre, which is a big shopping centre. I had found a pair of shoes on Hollywood Boulevard that I really wanted but they didn’t have my size, but I was told that they did have it at the Beverly Centre. By looking at a map it didn’t look like it was going to be that long a walk, but after about 45 minutes we were actually not even half way there. Los Angeles is a big city, it really is hopeless to try to walk anywhere because of the size of the city. We learned that the hard way. In the end I got my shoes, but we then took the bus.
A walk along Venice Beach was quite romantic, and if you follow the beach you will eventually end up at Santa Monica Pier. It was not a short walk, but a very nice one. We were told by our taxi driver that it is not safe to stay at Venice Beach after dark, so we really didn’t have a choice but to start walking. It all reminded me of Baywatch, and I almost expected to see Mitch Buchannon running into the water to rescue a gorgeous woman. Santa Monica is actually the end of the famous Route 66, so we even got to see that.
Los Angeles truly was amazing, and we got to see and experience so much. It was the perfect start of our three weeks in America, and writing about it now and looking back it truly was spectacular.