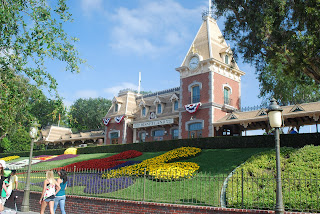 Next to Universal Studios and Celebrity Tour in Los Angeles, we had to visit the famous Disney Land, the happiest place on earth. And it really was a happy day.

Disney Land was one of the first tourist attractions we saw in LA, and we got up early in the morning, had a big breakfast and were ready for a day of fun! A car picked us up outside our hotel, and after about 30 minutes we were at our destination. I think this park is so beautiful, and you really do feel like a kid again and you just want to do everything. But of course, that is impossible if you’re only there for a day.
We started our day by walking down the Main Street in the park, where they have several cafes and shops. It was a beautiful day, and of course that attracts a lot of people. We were there pretty early, but we still had to queue up for about 25 minutes to take our first ride, which was Matterhorn Bobsleds in Fantasy Land. I thought this was a lot of fun, and a great start on our day.
But like I said, it was a lot of people here, and you had to wait for quite some time for many of the rides and it got worse during the day. So if you only have one day here as we did and you’re not staying at Disneyland Resort where you can come and go as much as you want, you should choose the rides you want to take the most and take them as early in the day as you can! We tried to do this, but we ended up not taking everything we wanted to because of the queues. But we did take Big Thunder Mountain Railroad, Pirates of the Caribbean, Space Mountain, It’s a small world and Haunted Mansion.
Space Mountain was a very popular ride, and I believe we were in the queue for about an hour, or perhaps even longer. But it was worth it, because it was so much fun! There are twists and turns as you’re supposed to be on your way through the Milky Way, and if you like roller coasters then this is the best one. The Haunted Mansion was actually not so scary, and I get easily scared. You sit in a buggy that takes you around this elegant house, but even though it is not scary it is still a nice journey with ghosts.
We had lunch in one of the many restaurants, and we were lucky to find a table for all four of us. But later on this very hot day, we wanted some desert and we ended up at the Golden Horseshoe where we had the best ice cream. Kjell Steinar and I shared a mint chocolate sundae, and I am very glad we did share it because in America everything is big when it comes to food. But it was very good, and so was the atmosphere. It was also a stage there and we were so lucky as to see a funny show.
The time went by so quickly, and we ended up spending the entire day here. One of the rides we all wanted to take but didn’t was the famous Splash Mountain. We would then have to queue for over two hours, and in the end we were queuing just to walk around the park. It was a very good day we had in Disneyland, and it is very popular for kids in all ages. I would absolutely not mind going back at some point to explore all the things we didn't get to see this summer.